The Luxembourg Stock Exchange (LuxSE) and the European Stability Mechanism (ESM) gathered around the bell to celebrate the listing of ESM’s first bond governed by Luxembourgish law. The ceremony took place on Friday 8 November in the presence of H.E. Pierre Gramegna, Luxembourg Minister of Finance.

“As an active issuer on our exchange, the ESM has greatly contributed to developing the financial ecosystem in Luxembourg, providing liquid instruments to the capital markets. We commend the switch to Luxembourg law as a major recognition of the legal framework in Luxembourg,” stated Robert Scharfe, CEO of the Luxembourg Stock Exchange. 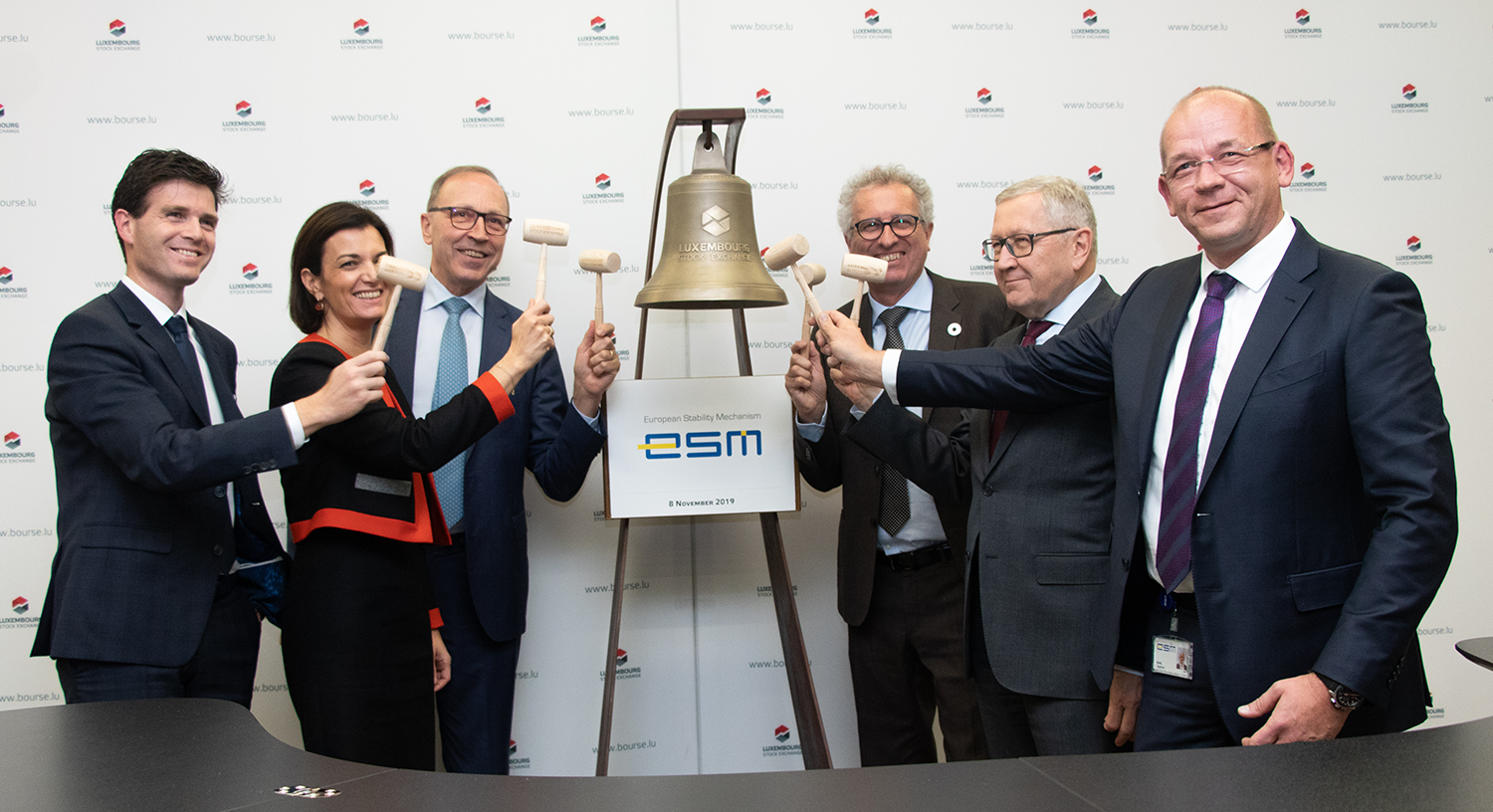 In September, the European Stability Mechanism announced that it would stop issuing euro-denominated bonds governed by English law and switch to Luxembourgish law for its euro bonds, starting from 1 October. ESM’s first bond issuance under the new regime was a 5-year bond raising EUR 3.5 billion, which was listed on the Luxembourg Stock Exchange on 29 October. The 0% coupon bond was oversubscribed with orders exceeding EUR 6.4 billion, and completed ESM’s fourth quarter funding needs.

“As a Luxembourg-based institution, the ESM decided to begin using Luxembourgish law as the governing law for all its new euro-denominated bonds and bills since October. We have seen support from banks and investors for this move. It is a concrete way to both underpin, and show the strength of, the European capital markets union. The ESM is delighted to participate in this bell ceremony at the Luxembourg Stock Exchange where our bonds are listed,” said Klaus Regling, Managing Director of the European Stability Mechanism.

The European Stability Mechanism has listed its bonds on the Luxembourg Stock Exchange since 2012. Over the past 7 years, the ESM has raised close to EUR 160 billion to help euro area countries in severe financial distress. In 2019 alone, the ESM has issued bonds totalling EUR 9.8 billion. This makes ESM one of the most important issuers of euro-denominated bonds in the Eurozone. Going forward, all ESM’s euro-denominated bonds will be governed by Luxembourgish law.

Minister Pierre Gramegna commented: “As the host country of the ESM, Luxembourg has played a supportive role in the establishment and the development of the institution, and, by extension, to the strengthening of the Euro Area. I welcome the issuance of the first ESM bond under Luxembourg law, which is not only an important step in the common history shared by Luxembourg and the ESM, but more importantly a strong sign that the Euro Area stands united and is ready for future challenges.”