“Today marks an important step forward in our longstanding relationship with CMB and for the future of commercial banks’ sustainability mission in China. Driving a sustainable recovery is a priority for us all and we are proud to facilitate CMB’s innovative actions through this listing and further inclusion on LGX,” commented Robert Scharfe, CEO of LuxSE. 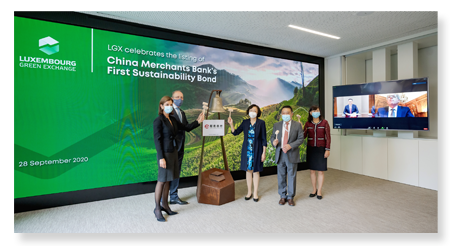 In light of the current climate, LuxSE’s traditional Ring the Bell ceremony was partially moved to the virtual sphere with only a limited presence at the exchange to celebrate the listing, including China’s Ambassador to Luxembourg, Yang Xiaorong. Pierre Gramegna, Luxembourg Minister of Finance, joined the celebration virtually and highlighted Luxembourg’s pioneering role in sustainable finance and the need to ensure a sustainable recovery from the crisis.

The 3-year Sustainability Bond is a first-of-its-kind issuance by China’s largest commercial bank and reflects the bank’s overall sustainability strategy, which is demonstrated through the publication of CMB’s Green, Social and Sustainability Bond Framework in September this year, where a clear exclusion of clean coal was made.

“Luxembourg is an important partner of the Belt & Road Initiative and we are pleased to celebrate the successful listing of our first sustainability bond in Luxembourg. This bond issuance reflects our international ESG strategy, as well as our focus on creating long-term value and contributing to building a green and sustainable future,” said Tian Huiyu, CEO of CMB, who attended the ceremony virtually from CMB’s headquarters in Shenzhen, China.

Towards harmonisation of standards

Founded in 1987, CMB was the first joint-stock commercial bank in China and has historically been open in its approach to global issues. CMB’s Luxembourg branch was established in 2015, and acts as the bank’s European headquarters. It provides a range of financial products and services to corporate and private customers across Europe and in China.

As the leading platform for the display of Green, Social and Sustainable securities, LGX’s stringent admission rules - with which CMB’s Framework aligns – are testament to the ongoing harmonisation and convergence of standards in the field of sustainable finance.

LuxSE and CMB have a longstanding relationship, which has gone from strength to strength over the last number of years. In June 2019, the two institutions joined together to celebrate the listing of CMB’s first-ever Euro-denominated bond. In 2016, LuxSE and CMB signed a Memorandum of Understanding and agreed to cooperate on listing and trading activities of securities issued by China Merchants Bank and its clients.