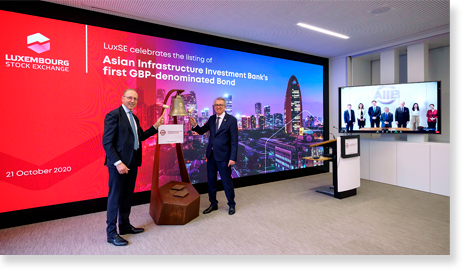 “The relationship between AIIB and LuxSE gains even stronger foundations with the listing of this first GBP denominated bond. Global cooperation is needed to generate the necessary capital to create sustainable infrastructure for the future, and AIIB plays an essential role in this development. We are proud to serve as the reference exchange for its bond issuances,” said Robert Scharfe, CEO of LuxSE.

This issuance marks the twelfth bond listing by AIIB on the Luxembourg Stock Exchange since the bank established its Global Medium Term Note Programme in December last year. Previous bond issuances have been issued in Turkish Lira, Russian Ruble, Thai Baht and Hong Kong Dollars, and the recent GBP-denominated bond issuance reflects AIIB’s strategy to diversify its investor base.

AIIB was established in 2016 to improve social and economic outcomes in Asia through sustainable infrastructure investment. Today, the multilateral development bank counts more than 100 members, and Luxembourg was one of the first countries to become a non-regional member of the bank. 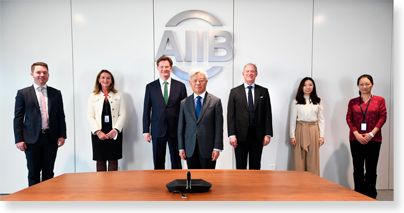 In July last year, AIIB chose Luxembourg as the location of its popular Annual Meeting, which saw prominent leaders from the international financial industry gather in Luxembourg’s European Convention Centre. Last year’s event marked the first time AIIB’s Annual Meeting was held outside of Asia, and illustrates the bank’s international reach and Luxembourg’s appeal as a financial centre.

“This transaction represents another step in the diversification of AIIB’s funding program for the financing of our investments in sustainable infrastructure. With more than half of our bonds listed on the Luxembourg Stock Exchange this year, we truly value our close partnership with the Exchange in contributing to our endeavour to improve the lives of millions of people in Asia and beyond,” said AIIB President Jin Liqun, who was recently elected to a second term at the helm of the bank.

Following the opening speech from Robert Scharfe, CEO of LuxSE, Luxembourg’s Minister of Finance Pierre Gramegna praised the close relationship between Luxembourg and the AIIB.

“I am pleased that for many of its bonds, the AIIB chooses Luxembourg as its listing place. A core mission of the AIIB, and one underlying this first Sterling bond issuance, is to better connect Asia and the rest of the world and to build sustainable infrastructure. The pandemic has shown that human economic activity has an impact on our planet. We therefore need a sustainable global economic recovery and infrastructure investments will play a key role,” commented Minister Pierre Gramegna.

LuxSE has a proven history of acting as a gateway for Asian issuers to gain access to the international investor community, thereby supporting the ongoing opening-up of Asian financial markets. Multilateral development banks, such as AIIB, play a key role in the ongoing recovery efforts and in the transition to a more inclusive economy. LuxSE is the reference exchange for major development banks across the world.